Well we have just a lovely 3 days at Bridgend County Show with Talygarn Vaulters. The weather wasn’t the best this weekend and a lot of the displays appeared not to have turned up but we were there and not the best conditions for Equestrian Vaulting I can tell you. Friday morning we decided to perform in walk as the ground had been wet but the going didn’t seem to bad so we tried a bit of canter with Sion and he seemed to cope ok. For the afternoon performance we decided to do more canter with splash and Sion but the ground was not as good as the stunt bikes had made it slippy in places. Splash is not very good at left lead canter and is easier to canter right, having decided to canter on the right rein after picking up canter right three times he then decided to pick up left lead on the right rein every time, purely to be awkward I’m sure. Then Splash decided a buck would be appropriate when Sophie vaulted on which became a rapid vault off and Teegan lost balance and fell off later in the act. Moving on to Sion he started well but then slipped a little and became a bit fast so Tayla did her canter routine in Walk and Carys tried for canter again which wasn’t too bad but a bit fast in places. Saturday it rained all night and was still raining when Carys and Sophie turned up at 7.30am to get the horses ready – we nearly decided to abandon when it started to brighten up a bit so we decided to keep the displays in walk. We didn’t want to disappoint our vaulters as for some of them it was the first time they have performed in public. After our first display there was a downpour so the afternoons performance also stayed in walk. Sunday the weather was brighter but windy – which was good for drying out the ground but difficult to stand on a 17hh horse without being blown off. Sophie had to stand in for Shanae in the squad as she wasn’t able to come due to a wedding and twins Chloe and Kara had to stand in for Thalia and she couldn’t make it either – one am and one pm. The morning display went very well, we even managed a couple of circles in canter with Sion. Woody was a bit alarmed by the wind so we added a side walker with him just for reassurance and to make it safer for the vaulters. Unfortunately when dismounting in the squad routine Ellie twisted her ankle and had to go to A&E for a check as it was swelling up so Carys took Ellie’s place in the afternoon – which then meant 50% of the squad had changed but to be fair they picked it up very quickly. We attempted a bit of canter with Sion in the afternoon but although he didn’t slip the circle was a quite erratic due to him falling in against the wind. I was very impressed with Sion I didn’t expect him to be so calm in that environment. The worst thing for the vaulters was dismounting and slipping over on the damp grass a few fell on their bums after sliding on the grass. There is a lot of work to do behind the scenes to get ready for displays and I can’t thank Carys and Sophie enough for turning up every day at 7.30am to bath, plait, clean tack load the lorry and travel the horses and not leaving for home till after 5 after sorting out the horses, unloading and cleaning the lorry and washing all the bandages and pads for the next day. Also thank you to Kim who washed the catsuits saturday evening as there was a lot of mud stains to remove for sunday. Between performances we had time to have a wander around the show and my favourite tent has to be the food one – I can recommend the pork and stuffing pie, the cranberry pork pie, the pepper cheese and smoked cheese, the walnut, cherry, and cream fudge, the strawberries & cream scone and the welsh cake and I will be on a strict diet for the next 6 months to burn it all off.

All Photos of Talygarn Vaulters at Bridgend Show can be found at http://www.talygarnec.co.uk/talygarn-gallery/ 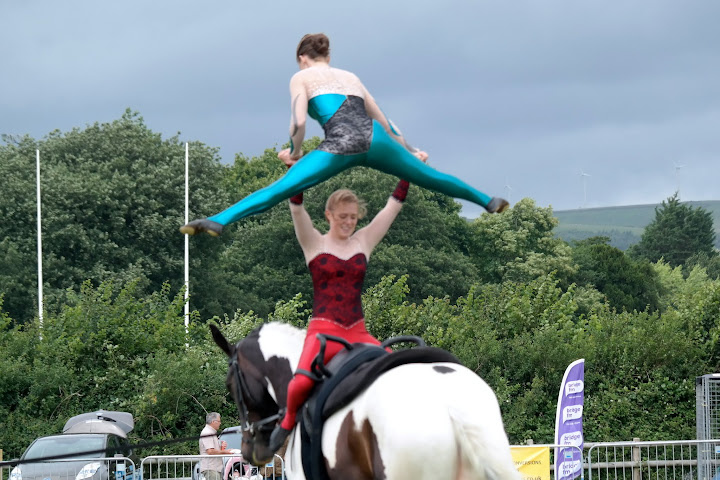